You may have noticed the small but attractive tan brick building at 110 E. Second Street that has Mitchell’s only gargoyles and a 36 foot wide stained glass transom window spanning the front. The interior has a mezzanine along the length of the back wall. It was built as a bank building in 1916 and currently houses Kelly Gross’s insurance agen­cy.

It was built by George E. Logan (my grandfather) for local banker O.L. Bran­son. Fortunately my grandfather commissioned prominent Minneapolis architects Purcell and Elmslie, leading proponents of Frank Lloyd Wright and the Prairie School of Architecture to design it. The resultant Branson Bank Building is not only architecturally significant on a local, but also a national level.

Otis L. Branson was a banker and attorney from Osmond, Nebraska, who left his law practice and business interests to move to Mitch­ell in 1900 to take control of the struggling First National Bank. According to his bi­ography in “Who’s Who of South Dakota” written by O.W Coursey and published by the Argus Leader in 1913, Branson was able to quickly raise the deposits of the bank to $550,000. He sold his interests in the First National Bank in 1915 and laid plans to open the O.L. Branson Company bank. He persuaded another former partner in the First National Bank, my grandfather, to build a suitable building for his new enterprise. The building was built for a reported total cost of $10,500.

According to “The His­tory of The Mitchell Banks and their Notable Presidents” self published in 2006 by local historian Garvin Bertsch, construction on the building was completed by April 1, 1917 although the bank didn’t hold a grand opening until sometime later as all the fur­niture hadn’t yet arrived. 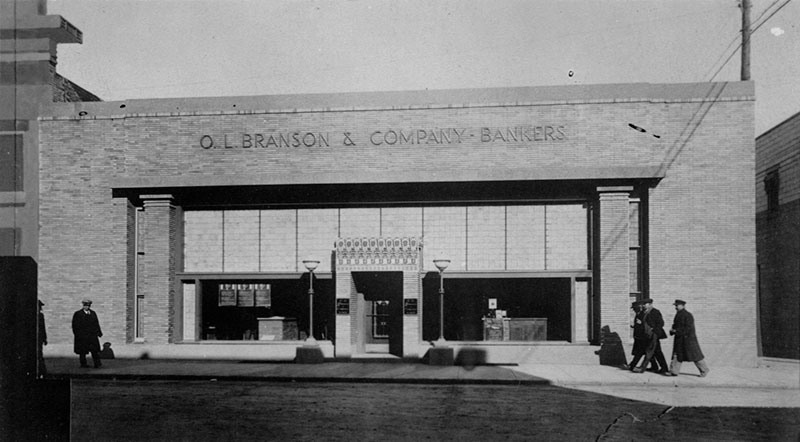 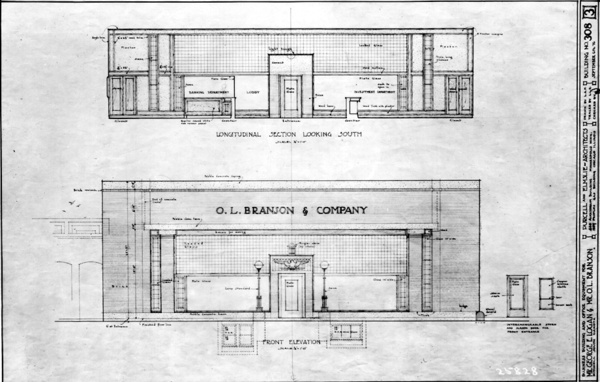 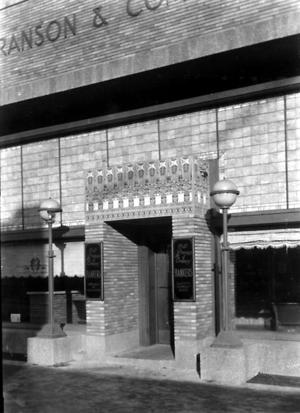 Branson was a noted orator who while in Mitchell served as mayor and two terms as Davison County’s representative to the state legislature. He also served as president of the local Rotary Club and was active in community and political affairs. In an August 9, 1967 ar­ticle by P.F Brennan in the Daily Republic, Milt Kud­lacek, head of the Fine Arts department of Dakota Wesleyan University, said the building is “The best building ar­chitecturally in Mitchell. It reflects a significant style, blending function, ornament, proportion, and space into a revealing artistic experience.”

He went on to describe the building: “It reflects the function­al style of pioneer modern American architect Louis Sullivan and the organic architecture of Frank Lloyd Wright. The building shows a sensitivity of proportion and warm materials such as the unusual brick, the terracotta ornamentation over the doorway, and natural wood used on the interior. As Sullivan and Wright developed a concept of space in their buildings, so too, did Purcell and Elmslie create a dynamic sense of space on the interi­or of what was the Branson Bank Building, rising to the full height of the building inside with an exposed mezzanine over the vaults. The building has since been remodeled and much of the spatial effect has been lost.”

An amazing amount of the building is still intact with almost no changes having been made over the years to the exterior and very few to the interior . Much of this can be attributed to the soundness and functionality of the original design and the small number of tenants to have occupied it over the years.

Frank Lloyd Wright himself visited the building in the mid-1930s while in Mitchell on a brief stopover between trains. Wright had spotted the building and stopped in to inquire who the architect was and ask a few other questions. The building is also highlighted in H. Allen Brooks 1972 book, “The Prairie School: Frank Lloyd Wright and His Midwest Contemporaries.” Besides using an illustration of Purcell and El­mslie’s drawing of the front elevation of the bank, Brooks talks about the Woodbury County Courthouse in Sioux City, Iowa and continues, ”Another Purcell and El­mslie essay on the post and lintel theme is the one story bank for O.L. Branson and Company (1916) at Mitchell, South Dakota. Here the volume of space enclosed is clearly expressed by the structural frame which frees most of the long front from intermediary supports. This support system made possible the installation of a glass screen consisting of small leaded squares of mottled glass, under which are located the long plate glass windows.” With the stock market crash and dust bowl plunging the country into the great depression, President Roosevelt ordered a “bank holiday” closing all the nation’s banks to allow time for federal examiners to go over the books of all the banks before allowing any to re-open. The Bran­son bank did not survive the audits. It was rumored that with interlocking partners of several of Mitchell’s banks, some weak loans had been secretly swapped for sound loans back and forth between banks to sacrifice some banks in an effort to keep others open. 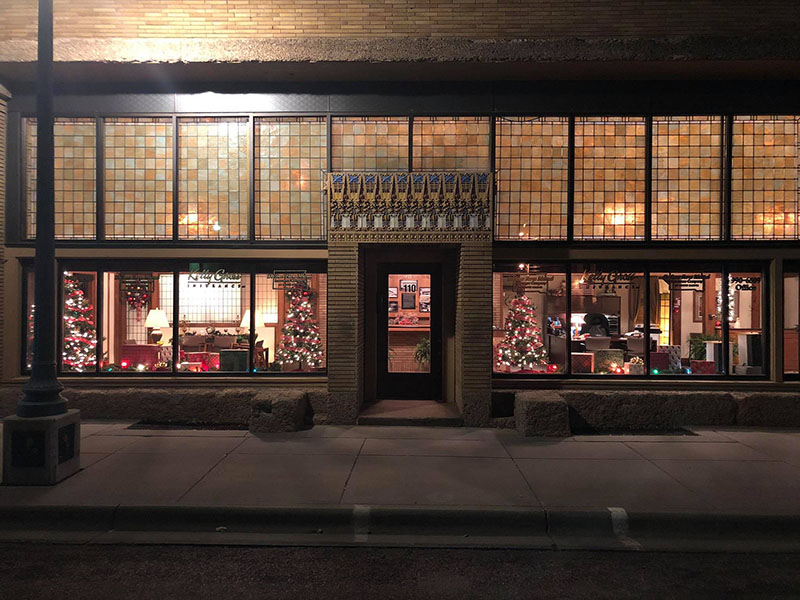 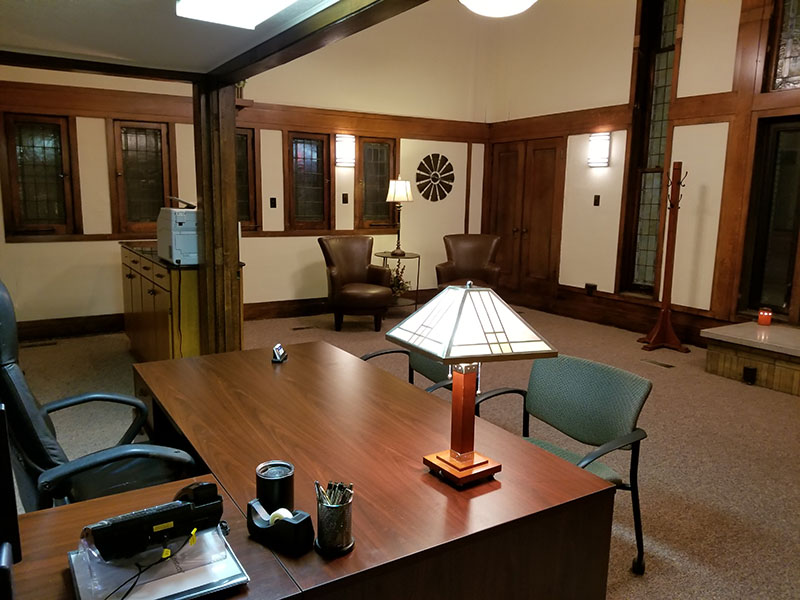 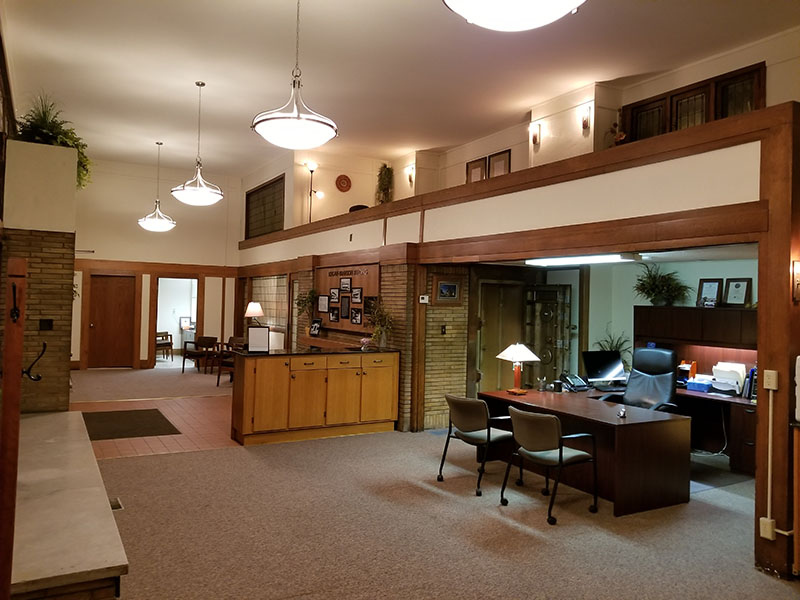 After sitting vacant for a few months, a tea room with a telephone ordering system occupied it for a few years after the bank went out. The next tenant was the Mitch­ell Abstract Company, who would luckily use the bank building and furnishings almost intact for the next forty years until 1999 thereby preserving most of the building’s features. E.H. Millen and his son George owned the Ab­stract office and also sold in­surance from the office. For many years, they sublet the west section of the building to R.L. Dice for his insur­ance agency. They painted the word “Insurance” in large letters across the stained glass window across the front.

The Mitchell Abstract changed hands and moved out in 1999. The American Red Cross rented the build­ing from 1999 until 2001. In 2001, Handi-Cash U.S.A., a loan and pawn shop, rented the building for about a year until a street reconstruction program cut off traffic making access to the building so difficult, that the shop soon went out of business. From 2002 to 2009, Lady Di’s Beau­ty Shop occupied the space.

While little was changed in the building, time had taken its toll. In the early 1960s in an effort to air condition the building and cut utilities, a drop ceiling was installed at the level of the top of the handrail of the mezzanine. This cut off the view of the original ceiling and plywood was installed behind the stained glass to further insulate the building. Ten years later, the stained glass was deteriorating and the zinc moldings holding the glass were beginning to collapse on themselves. But I always recalled the beauty and spaciousness of the building from visiting it as a child with my father. After Lady Di moved out, I embarked on an extensive remodeling project to restore the building to its former beauty. We were awarded a Deadwood grant which covered most of the cost of re­storing the stain glass in the building. The drop ceiling was removed, new heat and air conditioning installed along with rebuilding light fixtures. Energy efficient double pane windows were installed in front of the stained glass as has been clone in many churches to protect it from the weather and better insulate the building. The walk in vault on the main floor and in
the basement are still operable.

Early pictures show two lightposts fronting the entrance. According to my father, since they rose only about eight feet off the ground, the globes were frequent targets of vandals from the beginning. They were often broken or damaged. Later pictures show different shaped and/ or missing globes. The lamp posts themselves disappeared in the thirties. My dad said that after returning from a weekend trip to Minneapolis, they returned to find the lamps gone. They had been unbolted from the building and the wires snipped. The police were never able to find the lamps or who stole them and guessed it was someone from out of town who was passing through.

The remodeling and restoration have been a great success and the building continues to inspire visitors. The south exposure lets the daytime sun shine through the stained glass illuminating the interior with a golden glow. In the evening the interior lighting shines out with the same warm glow.

On December 1st, 2020, Kelly Gross purchased the building from Jeff and Linda Logan, ending a remarkable run of 104 years of ownership by the same family.